Being the wife of a Nerd, video games are just part of my life.

I’ve never really partaken in the video game playing (except to play a few rounds of Mario Kart or Super Mario Bros. on the Super Nintendo back in the day), and to be honest, the whole first-person shooter thing makes me motion sick.

But alas, I’ve come to accept the role that video games play in my marriage. I like to call them “The Other Woman.” After we moved into our first house, I convinced James that we “needed” to buy another HDTV for The Nerd Cave (his room in the house for all of his “toys”) so that he could move all of the video game paraphernalia in there.

We have a lot of video game paraphernalia. I can’t count the number of games we own. We have an XBox 360 Elite, PlayStation 3 and a Wii. James also has a Dell XPS gaming laptop and a gaming PC in the Nerd Cave. He even has the HDTV set up to use as a monitor so he can play PC games on the TV.

James and his friends like to make fun of me because I never play the games. I watch. Or, if they’re playing first-person shooters (remember, motion sickness) I nap. Yeah, that’s right, I sleep and they play.

Last week, Ryan (James’ college roommate) was in town for work. He came over one night and the boys played Call of Duty Modern Warfare 2. I remember James waking me up at midnight (this was a weeknight, mind you) because Ryan had just left and it was time to move into the bedroom. Conveniently, there is a futon in the Nerd Cave that facilitates my napping.

Tonight, Ryan’s back. The boys are plaing CODMW2 again, and I took a few snapshots.

So, for your viewing pleasure, here are my Video Game Nerds: 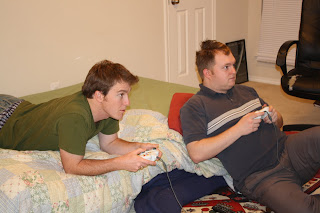 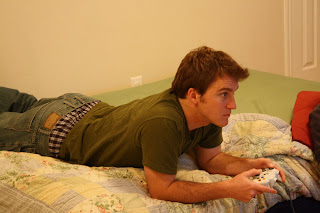 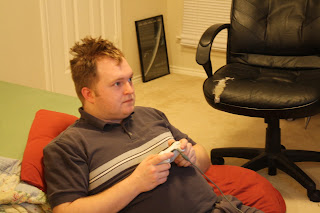 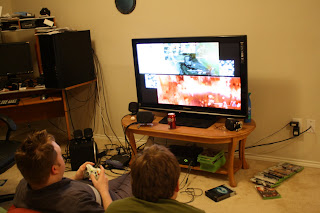 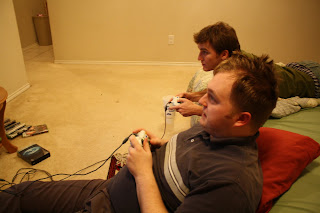 Love that face. He gets really into the games sometimes. 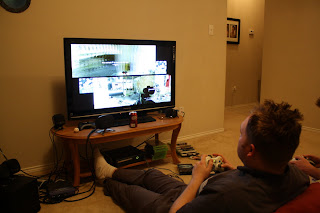 Yeah, that’s a Dr Pepper on the table. We <3 Dr Pepper.
Ah, the sounds of machine guns firing bullets into the air. I think feel a nap coming on…
Previous Post: « Double Chocolate Chews
Next Post: ‘Tis the Season »