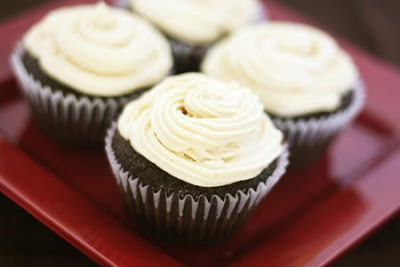 These cupcakes are yummy. Dreamy. Steamy. De-lish.
I could go on, but you get the idea.
The Bailey’s buttercream frosting is a-m-a-z-i-n-g.
Reminds me of the Girl Scout Cookie shots we did at the Dry Bean Saloon back in the day. And Four Horsemen shots. And Dragon Wars. Ah, college. How I miss those carefree days.
But I digress.
Irish Carbomb Cupcakes
Source: Annie’s Eats
A couple of things: Annie’s recipe yields 24 cupcakes. Yikes. That’s a lotta fat for my hips. I cut her cupcake recipe in half to make it an even dozen cupcakes. So, the “half recipe” is what’s listed below.
She also adds a Bailey’s Ganache Filling to her cupcakes. That was a little too much Bailey’s for my taste, so I left it out. You can head over there to get the instructions for adding it to yours.
I didn’t change anything in the recipe for the Bailey’s Buttercream Frosting. I made the whole amount in Annie’s recipe and just had a little left over after I frosted my cupcakes. I guess I just use a bit more frosting than she does… 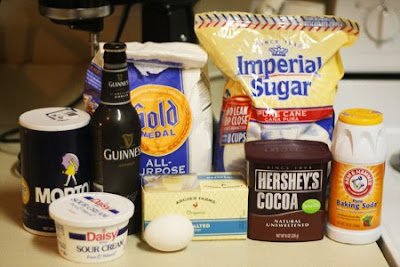 Cast of Characters (for the Guinness Chocolate Cupcakes):
1/2 cup Guinness
8 tbsp. unsalted butter
1/3 cup unsweetened cocoa powder
1 cup all-purpose flour
1 cup sugar
3/4 tsp. baking soda
1/4 tsp. salt
1 large egg
1/3 cup sour cream
Directions (for the Guinness Chocolate Cupcakes):
Preheat oven to 350 degrees. Line a cupcake pan with paper liners.
Mix the Guinness and butter in a small saucepan over medium heat, until the butter is melted. Add the cocoa powder and whisk until smooth. Remove from heat and let it cool slightly.
In a large mixing bowl, stir together the flour, sugar, baking soda and salt.
In the bowl of an electric mixer fitted with the paddle attachment, blend the egg and sour cream. Add the Guinness mixture and beat just to combine. Gradually mix in the dry ingredients on low speed until just incorporated.
It should look like this when you’re through: 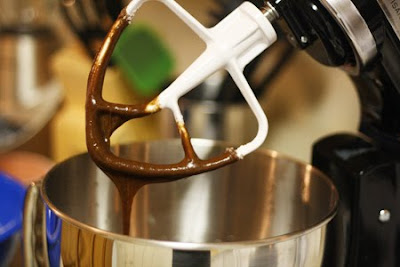 Divide the batter evenly between the cupcake liners, filling them 1/2 full. Resist the temptation to fill it to the top. Trust me, you don’t want to do that. It will rise as it bakes, so just leave it at 1/2 full, k? 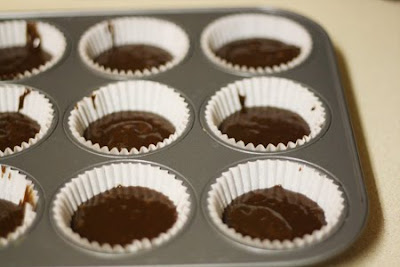 Bake until a toothpick inserted in the center comes out clean. 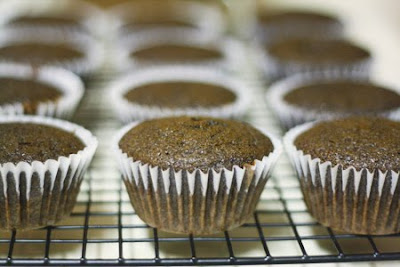 Mine took about 15 minutes and they were done.
Let cool in the pan for a few minutes, then transfer to a wire rack to cool completely.
Meanwhile, start on the Bailey’s Buttercream Frosting. 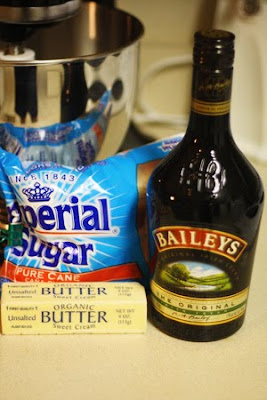 Cast of Characters (for the Bailey’s Buttercream Frosting):
8 tbsp. unsalted butter, at room temperature
4 cups confectioner’s sugar, sifted
6 tbsp. Bailey’s Irish cream
Directions (for the Bailey’s Buttercream Frosting):
Beat the butter in the bowl of a stand mixer fitted with the paddle attachment on medium-high speed until light and fluffy (about 2-3 minutes).
Slowly add the powdered sugar to the bowl until it is fully incorporated.
Add the Bailey’s Irish cream to the mixture until it is smooth. Add more Bailey’s as needed for the icing to reach piping consistency. 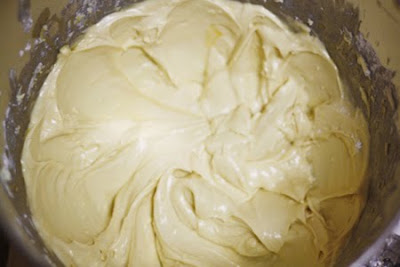 Transfer the icing to a piping bag fitted with a wide tip and pipe it onto the top of the cupcakes. 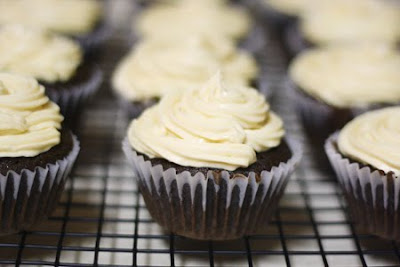 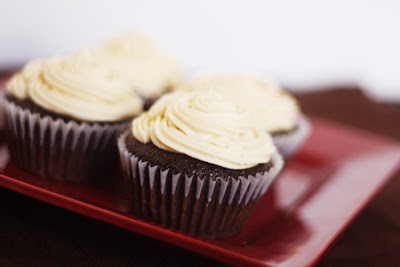